Eid-ul-Adha was approaching and Akmal was ordering a goat from his father so that he could sacrifice it. Akmal was a very cute child. He was in fifth grade. He lived in his house with his mother, father and grandfather, grandmother and two sisters.

Papa: I’ll bring the goat … but the animals have to be taken care of.

Akmal: I will take care of the goat together with Grandma and Mummy and I will not hurt her.

The next day, Papa brought a goat for Akmal. The goat was tied to the courtyard. Akmal and his sisters Aima and Haniya were very happy. The goat was named Sumo by Akmal. Sumo was very cute. The white sumo kept the Akmal very busy.

Akmal took great care of Sumo, even talking small things to her. Sumo would often shake his head at his words and sometimes even respond by saying ‘ mein mein’.

One day Sumo’s stomach got upset. It took motion. Dad wasn’t home either. Mummy went to the Quran class. She thought I’d talk to Grandma. He went to Grandma’s room and found her sleeping. Sumo’s condition was getting worse. He did not know what to do. In the morning, his father had given Motion medicine to Sumo. Akmal finally came up with the idea. He took some tea leaves In the name of Allah, he opened the sumo mouth and sumo ate it. By the grace of Allah, Sumo’s motions stopped and he recovered. Everyone in the house was very happy when they found out. Everyone applauded. Grandpa gave the money as a reward. Papa gave a party to Aima, Haniya and Akmal.

A few days later, it was Eid-ul-Adha.

Papa: This time on Eid we will sacrifice our favorite thing in the way of Allah.

Papa: What is your favorite thing?

Akmal kept thinking then suddenly “Sumo” came out of his mouth.

Daddy smiled. Akmal wanted to say something but said nothing. Papa told Akmal the story of Hazrat Ibrahim (AS) how by the command of Allah he was going to sacrifice his beloved son in the way of Allah. Satan was deceiving them. Abraham stoned Satan and went to fulfill God’s command. When he laid down Ishmael, Allah Almighty accepted the sacrifice and a rams came in place of Ishmael.

Papa: Will you sacrifice Sumo in the way of Allah?

Akmal’s heart sank for a moment but he was happy that Sumo was being sacrificed in the way of Allah.

Yes, daddy! We will sacrifice sumo.

On the day of Eid-ul-Adha, when Sumo was being sacrificed, Akmal did not cry at all, but when Aima and Haniya started crying, he began to explain.

My dear sisters don’t cry Sumo is going to Allah Almighty. May Allah accept our sacrifice? 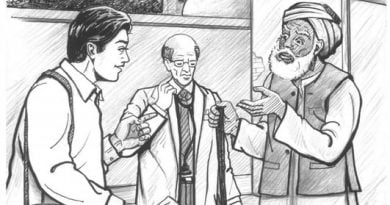