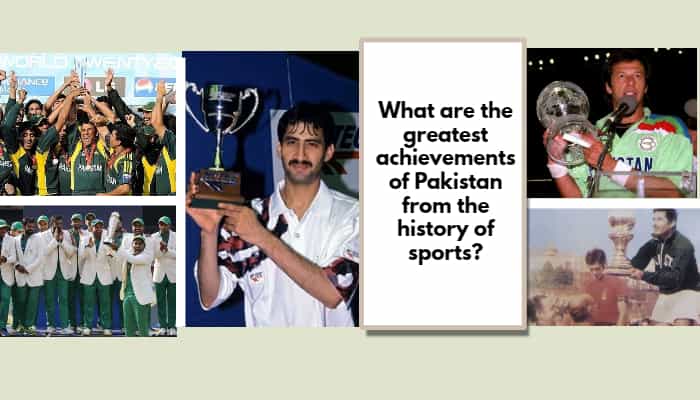 The list of extraordinary victories that Pakistan has achieved in its sports history is not only long, but it is not possible to cover it in a few words.

It is also difficult to decide which victory or the most memorable moment should be given significant space and who is not because each victory is important in itself.

Pakistan has made significant progress in a number of sports globally, but cricket, hockey, squash, and snooker are the four sports that have long victories.

These are also games in which Pakistan has been a world champion simultaneously.

Pakistan started participating in the Olympics from 1948. Pakistan hockey team came in fourth at the London Olympics.

He also finished fourth at the 1952 Helsinki Olympics. The Pakistan team reached the final at the 1956 Melbourne Olympics but suffered a one-goal defeat against India.

Pakistan beat India by one goal in the final. This historic goal was scored by Naseer Bunda.

The impressive performance of the Pakistani hockey team at the Rome Olympics can be gauged from the fact that it scored 25 goals in just six games and had only one goal against it.

After winning the Olympic Gold Medal, Pakistan’s second memorable victory in international hockey was the win of the first Hockey World Cup in Barcelona.

The Pakistani team, led by Khalid Mahmood, won the trophy by defeating Spain in the final with a goal that was specially made by Pakistan for the tournament.

The decisive goal scorer in the final was Akhtar-ul-Islam. Earlier, Pakistan defeated India by two goals in the semifinals.

The Pakistani hockey team’s success is also remembered because it was in a position to be out of the tournament at one stage, but the Netherlands’ strong team survived the unexpected defeat by Japan.

The World Open, played in Toronto in 1981, started with Jeff Hunt, but when it ended, a new winner was introduced in the form of Jahangir Khan. He won the world’s youngest Squash World Champion at the age of 17 by defeating four-time world champion Jeff Hunt in four games in the final.

It is worth mentioning that the date Jahangir Khan received the world honor on 28 November 1981 means that on 28th November 1979, Torsam Khan died.

Pakistani team not progressing to the semi-final in the last three World Cup matches but this time he reaches the finals for the first time but also became a world champion. But the way it all happened seems like a dream.

Her performance in the initial matches was disappointing and he lost three of her first five matches. But later he defeated Australia, Sri Lanka and New Zealand. However, only one point in the rain-affected match against England took him to the semi-finals.

In the semi-final, he dominated New Zealand and then defeated England by 22 runs in the Melbourne final.

Wasim Akram was the hero of the final, with two balls to play, which he bowled to Alan Lamb and Chris Lewis.

Young Inzamam-ul-Haq emerges as a great discovery at this World Cup.

In the semifinals, he played sixty-one runs off just thirty balls. In the final, he was able to score forty-two runs on thirty-five balls.

Captain Imran Khan’s take on the Crystal Trophy by Colonel Coward is considered one of the most memorable moments in the history of Pakistan cricket.

Mohammad Yousuf is recognized as one of Pakistan’s most experienced snooker players.

Playing calmly, Mohammad Yousuf made Pakistan the world champion in the world of snooker in the 1994 World Amateur Snooker Championship final in Johannesburg, beating Iceland’s Johansson by 11 points in the ninth.

Mohammad Yousuf also became the first Pakistani to win the Asian Snooker Championship in 1998. He also won the World Masters Championship in 2006, in which he defeated Glenn Wilkinson of Australia in the final.

Jan Sher Khan is not far behind Jahangir Khan in terms of his victories and performances.

He could not break Jahangir Khan’s record of ten British Open titles and when his career came to an end he had won the British Open six times. But he certainly has the unique honor of being the highest eight times world champion.

Jan Sher Khan won the eighth and last time at the World Open 1996 in Karachi. Their contender in the final was Australia’s Rodney Isles, who they managed to beat in four games.

Jan Sher Khan was to defend his world title in Kuala Lumpur next year, but due to the legacy of the Malaysian wife, she could not go to Malaysia, thus losing her international honor without playing.

Jan Sher Khan’s career came to an end when he preferred Lahore instead of London for knee surgery and his knee problem could not be relieved and he had to retire.

He tried to return to the game a few years later but could not succeed.

Pakistani cricket team lost to India in 2007 after an interesting match in the first T20 World Cup final. But two years later, he was honored to become the World Twenty20 champion under Younis Khan.

Pakistan defeated Sri Lanka by eight wickets in the final. Shahid Afridi once again played a victory role and remained unbeaten at half-century with his second consecutive Man of the Match.

Pakistani bowlers have been very good in this tournament. Umar Gul topped the list with 13 wickets while Saeed Ajmal took 12 and Shahid Afridi took 11 wickets.

This is a tournament that the Pakistani team has been trying to win for nineteen years but has not been able to succeed. This success under the leadership of Sarfraz Ahmed was possible after the ups and downs.

The three-wicket win against Sri Lanka made it to the semifinals where they defeated England by eight wickets.

In the final, the Pakistani team was against India, losing its first match, but in the final, it outclassed the traditional rivals by a massive 180-run win.

Children’s Books That Are Better Than The Movie