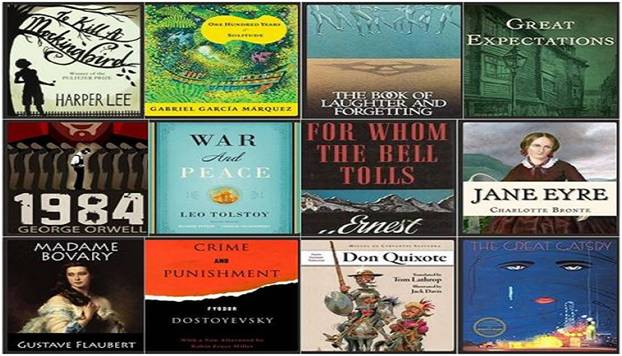 I am obsessed with reading. An idea came to my mind why not explore some of the best novels in the world of literature and present a brief introduction to them. To compile the list, look at the list of great novels published by some of the major publishing houses. The novels mentioned by the majority of critics and on the websites of international publishing houses are not mentioned here. Rather, the novels that I personally like and the critics are also soft-spoken on these novels. They are mentioned here. This is a list compiled on my personal preference and you may not agree with it in whole or in part, it is possible.

To Kill a Mockingbird

Harper Lee is considered one of the greatest novelists of the 20th century. His novel, To Kill a Mockingbird, was published in 1960 and was critically acclaimed by critics and readers soon after its publication. To date, the novel has sold more than 30 million copies and has been translated into more than 40 languages.

The novel is also a blockbuster film. The story of the novel is about a young girl and her enlightened father who is a lawyer by profession. When he fights a black case, the white community creates difficulties for him. In this novel, these difficulties and the racial disparities of American society are presented in a very effective way. The novel was also awarded the Pulitzer Prize in 1961.

Flavier’s novel, Madame Bovary, was a world-famous but controversial novel. Her heroine, Emma Bovary, dares to express her feelings despite being poor. His romance is defeated by the environment of the time.

Initially, the subject of love and affection in world literature revolved mostly around a romance between princes. For the first time, the love story of poor families was made the subject of the novel. When Madame Bovary was published in 1857, there was such a storm that Flaubert had to go to court. The novel was made into several films in Hollywood and France. In Bollywood too, director Kundan Mehta made a film called ‘Maya Meem Sahib’ in 1993 in which Deepa Sahi and Shah Rukh Khan played the lead roles.

One Hundred Years of Solitude

The novel by Nobel Prize-winning author Gabriel Garcia Marquez was published in 1967. The story of the novel revolves around the rise and fall of the Brenda family living in Macondo, a fictional village in Colombia. Every character in the novel is perfect. Especially the characters of ‘Jose Arcado’, ‘Amaranta’ and ‘Rebecca’ are eternal and leave a strong impression on the reader. The 4-generation story has been translated into 37 languages ​​and has sold over 30 million copies.

The masterpiece of the Russian writer Leo Tolstoy, this novel can undoubtedly be considered the capital of world literature. There are more than 300 characters in this novel. It is an immortal creation in terms of its size and spread. The novel spans 25 years from the beginning of the 19th century, boldly depicting the moral decay of Russian society and its hollowness. The era of being an attacker has presented in such a captivating way that the reader considers himself a part of that era. The novel has been translated into almost every language in the world that is published. Wherever world literature is taught around the world, Tolstoy’s novel is part of the curriculum.

No one knows the name of Eric Arthur Blair, but his pen name “George Orwell” is not only well-known to every literary enthusiast, but also a fan of his writings. There is hardly a reader of literature who has not read George Orwell’s ‘Animal Farm’ and ‘1984’. George Orwell wrote the novel 1984, in 1950, and the parable he presented to the world in 1984 at that time. If you read it today, you can’t help but admire George’s imagination.

1984 is considered one of the 10 best-written fictions of the 20th century.

The story is that due to huge global bloodshed, the world has now shrunk into only 3 states. Eurasia,  Eustacia, and Oceania. The main character of the novel is a native of Oceania. Oceania is mainly made up of Western Europe (England, France, etc.) and the United States. According to the author, English socialism is established here. This novel tells how the state of Oceania brainwashes its people. The rulers have set up an institution called the Ministry of Truth to change history, circumstances, and events as needed. This novel is a must-read for any reader of world literature.

This novel by Fyodor Dostoevsky was published in 1866. “Crime and Punishment” is the story of a miserable young man who one day kills his landlady. The motive for the murder is the demand for rent from the landlord and the poverty of the boy which takes the form of hatred. This novel beautifully depicts the conflict that arises in the heart and mind as a result of committing a crime and concealing it. Raskolinov’s role is undoubtedly one of the most memorable in Russian literature.

The Book of Laughter and Forgetting

Milan Kandara is my favorite writer. Laughter and Forgetfulness is a Czech novel that covers psychological issues. In the novel, the angels are smiling at the fact that God’s creation of the universe and the system is completely meaningful and Satan laughs by saying that nothing in this universe has any meaning. It’s all a mixture of nonsense and nonsense that has been given different meanings. The novel consists of 7 different chapters. Each chapter is illustrated with different stories and anecdotes.

For Whom the Bell Tolls

Ernest Hemingway is known to every reader of English literature because of his most famous short novel, The Old Man and the Sea. In 1940, his novel, For the Home of the Bell Tolls, was published about the Spanish Civil War. This novel was written in the context of real events. The main character was played by Robert Jordan, an American soldier who was fighting the Spanish troops on behalf of the republic. This novel is considered to be Hemingway’s most important literary achievement.

Don Quixote is considered one of the most influential and well-known novels in Spanish literature. It was first published in full in 1615. This novel is considered one of the best literary works of all time. It is based on the story of a man who chooses for himself the name “Don Quixote de la Mancha” and becomes a hero in romance novels by creating a passion for loyalty and restoration of tradition.

Don Quixote’s character has become a rare hero, influencing art, music and literature since the novel was published. The character’s popularity can be gauged from the fact that the word ‘Kyuzotik’, coined by Don Quixote, is used to describe someone who is foolishly passionate about achieving extraordinary goals, especially, loud and is known for its romantic ideas. Don Quixote is the best-selling novel in history, according to research on a reputable website. According to a conservative estimate, it has sold 500 million copies to date.

Scott Fitzgerald’s masterpiece is one of the most popular American novels of the 20th century. The hero of “The Great Gatesby” is unforgettable in terms of a mixture of tradition and imagination. Gates B is a well-educated hero who suddenly becomes very rich and holds a lavish ceremony every week in his castle-like palace to alleviate his loneliness.

Because of these celebrations, he became very popular among the elite. The aim of these celebrations is to get close to a bourgeois class married Hasina Daisy Buchanan, whom he loves dearly, but the woman and her classes do not accept. The novel is also considered a satire on the famous American metaphor. The novel is a satire on the emerging American society of the 20th century.

Jane Eyre, written by Charlotte Brown. is another novel that is considered to be the best novel to be promoted and recommended for school reading. It was originally published in 1847 under the pseudonym Kerr Bell, keeping in mind the fact that it was a novel written by a woman. Fortunately, much has changed in women’s literature since 1847, and now, with the privilege of being the author of one of the earliest novels about women in history, she has established herself. The bearer understands.

At a time when the author was forced to hide her identity, Jane Eyre told a unique story about women’s individuality and portrayed an orphaned and poor girl as a successful and independent woman through the main character of the novel. Its work combines The Gothic and Victorian literature in such a way that the characters’ inner actions and dialogues, focusing on Jane Eyre’s sensitivity, seem to create a revolutionary art.

This masterpiece by Charles Dickens is the story of an orphaned child named Papp, who is taken care of by a blacksmith family.

Good Will Hunting Review Of This Film

The Traveler of History and My Review