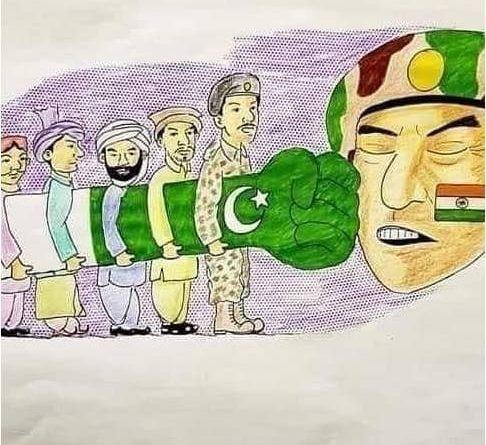 We often do not care that we are citizens of a free country. our cities and all the areas where we go are peaceful. Freedom and this peace are possible because of the military and security agencies that work 24 hours a day to defense our country. Their role is to work under the guidance of the civilian government for national defense and security. And their personnel makes great sacrifices in the line of duty when needed.

Defense Day, as the name suggests. Commemorates the day our forces fought hard against the Indian forces in 1965 and defended their country. It is celebrated on September 6 every year.

The enemy invaded our country on September 6, 1965. It was a response to stop the advance of Pakistani forces in occupied Kashmir. The adversary essentially assaulted the desert zones of Lahore, Sialkot and Sindh. The war lasted until September 22, 1965, after which the two sides agreed to an UN-administered ceasefire.

Our forces not only successfully defended the areas under attack but also ensured the safety of thousands of civilians and their homes. Therefore, it is our responsibility to honor all the military personnel of our country who have sacrificed their lives so that our relatives and our compatriots can sleep peacefully. This honor ought to likewise go to the military faculty who upheld our saints, taken a chance with their lives, and lived to recount to this story.

Many of our martyred national heroes were honored for their courage and bravery. The most elevated military honor is the Nishan-e-Haider Medal, granted to Major Raja Aziz Bhatti in 1965 for his unparalleled role in the defense of the Bedian area of Lahore. He is one of the few brave soldiers who were martyred in various wars and battles and received this honor. He made the greatest sacrifice for the defense of Pakistan.

Defense Day is also a day to renew our commitment. We are a strong nation and we will not fear any foreign nation, no matter how strong. Our army is a symbol of that and other things. Our army is a testament to the courage and military prowess of our great country Pakistan. Defense Day is a day to remember all this. So that we can remain strong and send the right message to the children and youth of our country.

Military parades showcase the latest technologies. The clear purpose of these events is to remember our heroes and demonstrate our military prowess. Our TV channels and web-based media additionally assume a function in accomplishing this objective.

Proud Of Our Forces

We should all be proud of our strong forces and their constitutional role in protecting the country’s land borders and national security. Even though we are suffering from economic problems. We are safe from foreign threats because according to many people in the world. Our forces are among the best in Asia. When we salute the war heroes of our past, we honor their sacrifices.

But our forces not only take part in battles during wars but also in nation-building in peacetime. Security forces often provide relief to areas affected by natural disasters and provide relief services during floods and earthquakes. Many military-run institutions, such as schools, colleges, and hospitals, also provide valuable services to civilians.

There is no set time to honor our national heroes. Any school or community function can be held at any time to pay tribute to all the uniformed women and men who have contributed to national security. We can likewise spread mindfulness via online media about their significance and their endeavors. We can also talk about the importance of the military and its constitutional role in our homes and in conversations with friends.

It will be a great result if it inspires our youth to join the army and serve the country.

Why Multitasking Is A Silent Killer That Destroys Creativity?

Awesome Animals With Trunks (With Pictures)